This article is intended to help explain the encapsulation (‘encap’) process and how it relates to low moisture carpet cleaning. 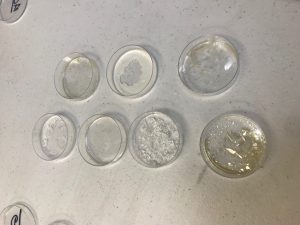 In short, encapsulation cleaners are simply detergents that contain polymers. These polymers aid in both the cleaning and encapsulation of soil and residue. When you use an encap product you are dispensing and agitating your cleaning solution into the carpet fiber. The polymer is also being incorporated into the fiber during this process blending with the dirt, grease and residue. The cleaning product breaks down soils and is removed (to varying degrees, depending on process), via pad, bonnet or brush. However, as with any on-property cleaning method, you are not removing the entirety of the soil or residue. The process and benefit of encapsulation begins to take hold during the post cleaning process.

Within a short amount of time the carpet will dry. As it dries, the polymer will begin to encapsulate and capture the remaining soil and residue it had been introduced to during the cleaning process. Once fully dried, the remaining encapsulated product will be removed with routine vacuum cycles.

This is a fairly straight forward process. Even so, there are variations of encap which impacts process, results, cost, etc.

The difference between the two takes shape in the dry down and post clean process. Due to the excess polymer used, crystallizing encaps, when fully dried, will, as the name implies, crystallize. The dry and brittle encap (along with its captured contents) is easily removed from the carpet via vacuum. Over time this will leave the carpet free of residue and soil.

Film forming encaps, while containing less polymer, will also dry down and encapsulate captured contents. However, the film former will not crystallize and shatter. Instead it will form (again, as the name implies) a film. This film is not as easily removed. Instead, it has what would best be described as an adherence to the fiber. Though it will eventually find its way free of the fiber and be removed with repeated vacuuming.

Which Should I Use?

The reality is this:

Any encap if over mixed (using more product than the suggested dilution ratio) can potentially cause a carpet to feel ‘stiff’. With that in mind, this condition can be quickly removed with vacuuming (typically 1 – 2 post clean cycles). Using low quality film forming ‘sticky’ encaps that use very little in the way of polymer can lead to conditions that are conducive to re-soiling. By simply following suggested dilution rations and using quality products, you’re very likely to avoid these issues.

Debate aside, it’s worth noting that crystallizing encaps generally cost more than film forming encaps. The polymer, an essential element to the encapsulation process, is the driving force behind the higher price. The more polymer used, the higher the price. Film forming encaps have a competitive edge in terms of price and this can lead to support from manufacturers and distributors. However, if not enough polymer is incorporated you can be left with a very inferior product.

As always, the best product is the one that you feel most comfortable with. It may be a film former or could be a crystallizing encap. It’s important to assess and test the various products available on the market. Consider the following when assessing a product:

Again, try the various products out there and decide for yourself!

Low moisture cleaning is not at all dependent on polymers. In fact, there are non-polymer crystallizing products that can be very effective:

Our own Green Dragon would be a prime example of this. This powdered product dries down and crystallizes quite well. Though it does not contain a polymer, it does utilize non re-deposition properties that repel soil from the fiber during the agitation process. The product also contains bonding agents. It does not encapsulate, instead, these bonding agents will breakdown residue and cling to the newly freed soil. The product and bonded contents will dry down, crystallize and be vacuumed away.

These low moisture powders are not exclusive to Green Dragon. There are other powders available that can be used with VLM processes.

Other products may be a liquid and use ‘salt’ based properties to crystallize.  While others act as a moist sponge (compound) that absorb soil. Compound is a common product used with counter rotating brush (CRB) machines. Though time consuming and somewhat costly, compound is a biodegradable option that is often times effective in both commercial and residential applications.

These non polymer cleaners will of course raise another question – should I use these instead of an encap? Again, this is why your own testing and assessing matters. Use the guidelines suggested above. Between the crystallizing, film forming, powders, compounds and myriad of liquids, there are lots of products to try. Have fun with it and use what works for you!

I hope you found this article helpful. Feel free to message me on Facebook or email (info@encapstore) with your questions or comments!